According to IndependentDealer.com, the typical buy here, pay here dealer produced a $1,213,236 annual pre-tax profit in the year 2005. Many of my successful buy here, pay here dealer clients make this kind of profit and more. That being said, some of them have asked me the question, So, I am making all of this money. Where is it? My response to them is, As long as you are 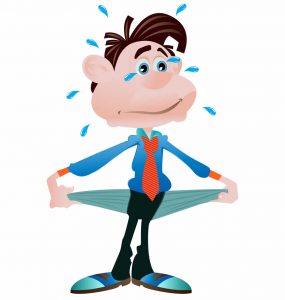 growing your sales volume and adjusting your business model upward, you will be cash poor.

One of the biggest factors contributing to dealers being cash strapped is the tax law change that took place in the 1980s. The Retail Installment Sales Act requires that dealers selling and financing vehicles must pay federal income tax on the entire profit of the sale in the same tax year of each sale. This means that dealers will pay taxes on phantom income unless they circumvent the law via establishing a related finance company that purchases each of the retail installment contracts.

Assume that a given dealer takes on the task of forming a related finance company. Just because he has shifted the tax burden to the future, does not mean that he has met every challenge related to the funding of his business.

Actual Cash Value (ACV) Creep and Competitive Down Payment pricing will consume much of the high net profits in his BHPH if the dealer does not have a good handle on his business model. Most all dealers realize that the wholesale cost of goods for used cars is climbing. But, many have yet to realize the impact this can have on cash flow when coupled with the natural tendency most dealers have to move up in car cost as they grow their BHPH business.

IndependentDealer.com shows that the average ACV, average down payment and average number of annual retail units sold for 2005 were $3,288, $808 and 768 respectively. Lets assume that this was a specific dealers business model. If this dealer had allowed his average ACV to move up to $4,500 for 2006, he would have needed an additional $930,816 to fund his 2006 sales. This assumes that the dealer maintained the same average down payment and sales volume as he did in 2005.

In most cases, however, when a dealer increases his average ACV he usually insists on larger down payments. Assuming he did so, he could still have a cash flow challenge. Even if the dealer had produced an average down payment of $1225 in 2006, his average cash-in-deal would have increased. In other words, the average ACV of $3,288 minus the average down payment of $808 would have required the dealer to risk $2,480 of his capital on each sale. His total 2005 sales would have consumed $1,904,640 in capital. Using the same math, the dealers risk for each sale for 2006 would have required $3,275 in capital. Therefore, one can see that the total capital requirement for the 2006 sales would have been $2,515,200.

Failure to properly control ones BHPH business model can create a cash flow disaster. However, once sales growth levels off and the business model is well established the dealership can become a cash cow.